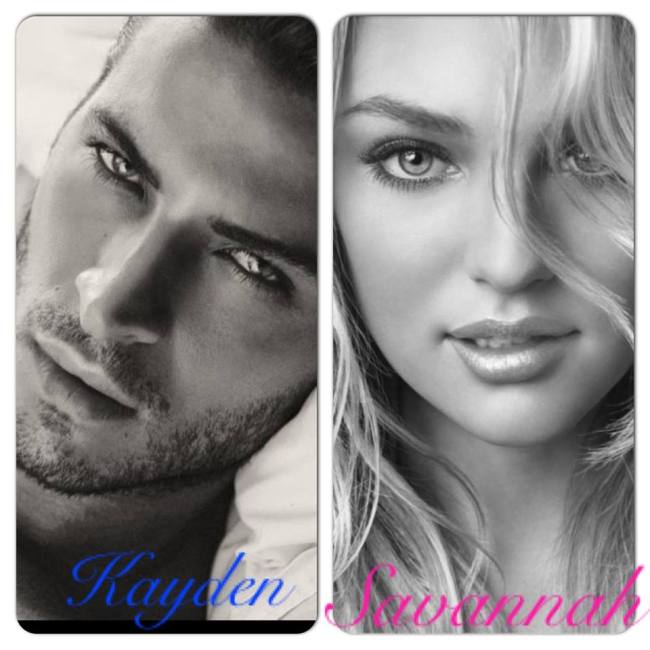 Today, we welcome to our blog Danielle Jamie’s characters, Kayden Knox and Savannah Livingston, from Inescapable Desire. We have been dying to meet this beautiful hot young couple for some time now…squeeeeeeeeeeeeeeeeeee!

Crazies – Tell us one thing about Kayden that no one else knows.

Crazies – Kayden, are you a boob or butt man?

Kayden – “I love me some boobs, but nothing is like a fine ass. I hit the jackpot with Savannah because she’s the whole package.”

Crazies -Aww, that’s so sweet : ) What was your first impression of Savannah?

Kayden – “Shy, but could have a kinky fun side buried deep down just begging to be released! I knew she was a spit fire who spoke her mind without holding back. I new that the minute she blurted “Holy Shit” when her eyes landed on me.”

Crazies -Oh my(fanning ourselves) !! Savannah, If you and Kayden were stranded on an island, what is the one thing you would take with you and why?

Savannah – “Whiskey because if I’m going to be stranded on an island, I’ll need to be drunk, haaa.”

Kayden – “A four-wheeler for us to go riding around on. It will definitely keep things fun!”

Crazies – We are sure you have plenty of ideas to keep things fun Okay, Savannah, where do you see yourself 5 years from now??

Savannah – “Hopefully still Assistant Editor at Envy and married with a little Kayden or a mini me running around in Sugarland.”

Crazies -Kayden, being so young and successful, tell us what drives you?

Kayden – “After injuring my knee my senior year, I gave up the dream of being in the NFL. So instead I focused on opening up my night clubs since I majored in business. My father owned the hotels and after I graduated I got half of the company. So I worked my ass off trying to be a successful entrepreneur. After my grandfather died, I took over our oil business. It was just another thing to add to my many business ventures. I love it. I love the feeling of knowing something is successful because of me.”

Crazies – Savannah, what do you REALLY think of Kayden’s parents?

Savannah – “I love Lorelai! She’s so sweet and funny. Reminds me a lot of Kayden. His father Victor, I don’t really know. I don’t recall even having a single conversation with him. I just know Kayden and him are not close. So really can’t say much about him.”

Crazies – This question is for both of you. What song best describes your relationship??

Savannah – “When we first met I would say Stay by Rihanna. I thought I was the only one out of the two of us with commitment issues. But soon I learned it took as much for Kayden to open up to me as it did for me to open up to him.”

Kayden – “Now I would say Boyce Avenue’s Find Me. I love that song and it speaks volumes for our relationship.”

Crazies – What is something Savannah does that no one knows about?

Kayden – “When she’s drank too much she craves French fries and will even fry them up naked as a jay bird. We keep her freezer stocked with bags and bags of seasoned curly fries, her favorite.”

Crazies – Savannah, what is the one thing about Kayden that absolutely annoys you?

Savannah – “His BOOTS. Omg ok. I am obsessed with shoes, I have like two hundred pairs. If they EVEN GET SCRATCHED OR SCUFFED then I chuck ’em. Kayden on the other hand…insists on wearing this one pair of cowboy boots. He says he’s had them for like 10 years. They look like a cow ate them and then shit them out!! But he refuses to let me buy him a new pair!”

Crazies – Kayden, whats with the boots?

Kayden – “They are my favorite boots. I still got a couple years left in ’em.

Crazies- Well Kayden, WE LOVE YOUR BOOTS and you can park em under our bed anytime hehe(giggling). Thank you both for taking time out of your day for us and agreeing to do this interview. It has been a blast : ) We wish you all the best!

Kayden & Savannah – “Thank you guys for having us and it was a blast for us as well.”